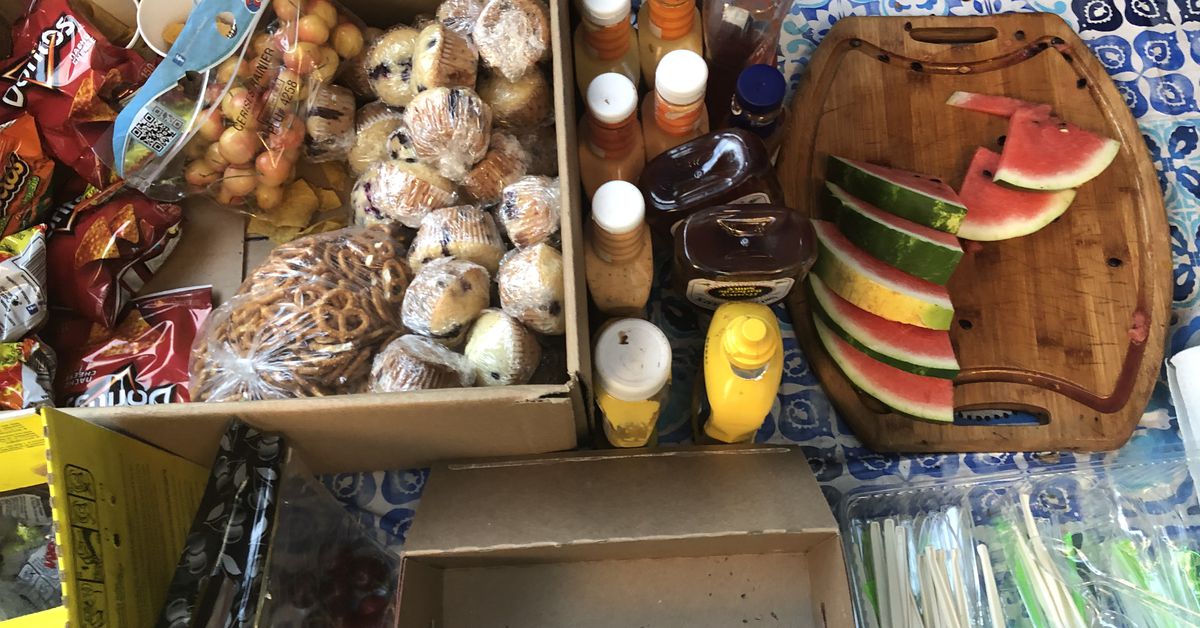 Standing in the middle of Lownsdale Square in downtown Portland on Wednesday night, among the various tents, drummers, and masked-and-helmeted twentysomethings, a man named Legend flipped ribs.

He was cooking in the middle of a makeshift kitchen, a table scattered with metal containers, plastic shelves stacked with water, hand sanitizer, and rubbing alcohol. On July 15, the kitchen was surrounded by a small barrier built with coolers, Kendrick Lamar’s music played in the background, and Legend’s fellow cooks tended to the other business at hand: sorting through donated water bottles, cutting slices of watermelon, tossing hunks of pork in barbecue sauce. A man named Rico handed the pork to people inside the kitchen and out — some sat in camping chairs, smoking cigarettes. Other volunteers greeted customers, serving them meals for free. “The people out here, they haven’t had a hot meal in 12 days,” Legend said. “That’s a big thing for us.”

By Thursday morning, Riot Ribs — a mutual aid kitchen physically located in the middle of contentious protests over police brutality — sat abandoned, behind a metal fence. After 12 days serving free ribs, chorizo tacos, and Beyond sausages to the people of Portland, city and county police arrested at least five members of the Riot Ribs team between 5 a.m. and 10 a.m., according to the collective; 10 members are still unaccounted for. Parks and Recreation brought in a cleanup crew, confiscating all of the group’s food, coolers still full of food for another day. As of 11 a.m. Thursday, the people behind Riot Ribs who haven’t been arrested are now separated from the kitchen they built, watching Parks and Recreation workers sift through from the other side of the fence.

Riot Ribs sat across the street from the Multnomah County Justice Center, which contains a jail, the Multnomah County sheriff’s office, and a few circuit court rooms. For more than a month, the park has been the site of nightly protests against police brutality and white supremacy, often resulting in police counter-protests in the form of tear gas, flash-bang grenades, and rubber bullets. Late in the night, the park can be chaos, people screaming and washing out their eyes with water or antacid solutions, panting through vinegar-soaked rags. Street medics wearing bike helmets and duct-tape crosses carry people out of the action after they’ve been struck with rubber bullets. Just a few days ago, Donavan LaBella was shot in the head with what’s called a “less than lethal” munition; the shot fractured his skull and required facial reconstruction surgery. And all the while, Riot Ribs kept whirring, cooking eggs and biscuits and gravy for permanent residents of the park in the morning, serving whole chickens and tacos to the protesters at night.

For 12 days — “Fuck 12 Day,” as many call it, an anti-police slogan reference to the drug and narcotics unit of the police — Riot Ribs stood, serving breakfast, lunch, and dinner to the protesters in the park and the houseless residents who stay during the day. It received enough donations that they had to turn things away; what it did take, it kept on ice, coming up with menus based on what was available. Despite the one-dish name, Riot Ribs cooked everything from bacon-wrapped jalapeno poppers to whole chickens, and served food to anyone who asked. Each day, it conservatively fed 400 to 500 people. Many of the people involved slept there — just a few hours each night in a tent nearby.

On Wednesday, before the raid, Lil Dil placed hunks of bone on one of the kitchen’s two grills, to use marrow on burgers, ribs, and pieces of bread. Lil Dil is originally from Minneapolis, where George Floyd’s murder in police custody set off nationwide protests against police brutality. He, like other members of the group, preferred to use a nickname to avoid potential retribution from police and alt-right groups. Soon after Floyd’s death, Lil Dil and his brother took a backpacking trip through the Pacific Northwest. They landed in Portland, and came across Legend’s rib-cooking operation. Lil Dil asked if he needed a line cook. “We’re a team,” Lil Dil said. “I wanted to cook for the community, the community needs to eat.”

Most of the people in the kitchen — including D’Anthony, who said he’s been protesting since the first nights in May and started working with Riot Ribs as soon as he could — have some sort of professional cooking experience. “People were hungry in the morning, and no one was working the grill,” he said. “I just jumped in.” Since then, things have gotten more dangerous: In addition to police interference, people they think are associated with the Proud Boys — a notorious alt-right group — have been circling the area in white trucks adorned with American flags.

Not only did they take our food, coolers, and donations, but they took all of our personal things as well:
donated phones and wallets. All of our clothes. Everything. We only have this phone left and that’s it.

At around 1 p.m. on July 14, police officers and park rangers delivered a notice, saying Riot Ribs needed to “remove their private property” for “maintenance” in the park within the next 24 hours. Using the group’s social media channels, Beans — Riot Ribs’ unofficial social media manager — sent out a tweet asking people to come down and occupy the space during the day of the potential raid, July 15. “People showed up. It was really amazing,” Dil said. “I almost started crying, people were chanting, ‘Riot Ribs! Riot Ribs!’ We’re going to stay strong.”

People took shifts watching the space, grabbing a piece of watermelon, a bag of chips, a cupcake from Riot Ribs’ pop-tent. Some were younger, dressed in classic protest attire — bandana, helmet, goggles (for tear gas), mask (for COVID-19). Others were long-term residents of the park; many of them would pick up trash littered throughout, and Riot Ribs provided their food and supplies, like face wipes and water. They wanted people to stay through the night and into the morning, worried they might be forced to vacate.

Early in the morning, the Riot Ribs team woke up to police telling them to put on their shoes and vacate. Nine people were arrested as a part of that sweep, but several more are still unaccounted for. Beans has spent the morning connecting with the people who have been released and trying to track down the rest; most of the people involved don’t have phones. Still, even without gear and many of their comrades, Riot Ribs isn’t gone forever. The group’s Cash App received a wave of donations, enough to rebuild a makeshift kitchen; by 11:30, they were passing out food to protesters once again. “We’re not leaving,” Legend had said Wednesday night. “They could tear us down tonight and we’d be back here tomorrow, fighting for our rights.”