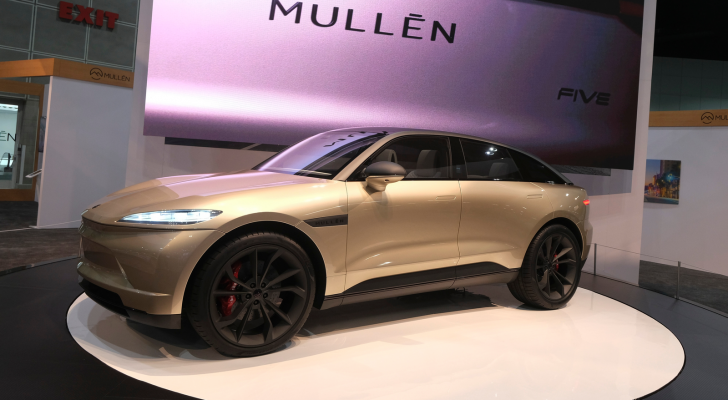 Mullen Automotive (NASDAQ:MULN) has most of the ingredients you look for in a pre-revenue electric vehicle (EV) company. Except for money.

Mullen has an attractive design called the Five. It has what it calls cutting edge battery technology. It has an enigmatic leader in David Michery, a former music executive.

What it lacks is enough cash to get any of this out the door. In a world that demands financial performance today, it can offer only promises for tomorrow. Speculators may still find profits shorting the stock or squeezing shorts, but there won’t be any cars coming.

Mullen came public last November through a reverse merger with a company called Net Element. In those happier, more optimistic days, shares briefly traded above $12. They have since gone nowhere but down.

Mullen says it has big plans for battery production in Monrovia, California and for assembly of the Mullen Five at a plant in Tunica, Mississippi.

But it’s rapidly running out of money. Mullen reported $65 million of cash on its balance sheet at the end of March. That’s not enough to build either batteries or cars. The Twitter feed of Chief Executive Officer (CEO) Michery keeps pumping out press releases calling his company a “Tesla (NASDAQ:TSLA) Killer,” but it looks like all smoke and no fire.

Catching on to Failure

Short-seller Hindenburg Research released a report on Apr. 6 saying it sees through all of this. It noted the company spent only $3 million on the battery design and said it misrepresented test results. Both the battery and the car design, Hindenburg said, were just rebranded Chinese offerings with Mullen logos. It said an order for $60 million in vans was from a cannabis dealer with one location. One of Hindenburg’s sources called CEO Michery “a hustler.” Claims involving its polymer battery didn’t hold up to scrutiny. In fact, none of the company’s claims held up.

Hindenburg concluded, “We have seen this story before, but Mullen strikes us as one of the worst. With echoes of Nikola, Lordstown, Kandi and Ideanomics, we think Mullen is just the latest in a long line of EV hustles.”

This should have sunk the stock. Instead, The Street merely called Mullen’s subsequent trade “volatile.” Against the Hindenburg report, Mullen bulls put up a February article in CarBuzz that called the Five’s design “the real deal.”

Mullen has since filed for an Advanced Technology Vehicles Manufacturing (ATVM) loan from the government based on an electric van design called the Mullen One. This brought in Reddit traders who are anxious to profit from a short squeeze. About 15% of the stock’s float was recently being held short and off the exchange that figure rose to almost 30%. News that Mullen might ramp up production was keeping the stock active in early May.

The Bottom Line on MULN Stock

Short sellers have been wrong before. I don’t think Hindenburg is wrong this time.

Regardless of Michery’s claims, the numbers don’t add up. You don’t get a cutting-edge battery design for $3 million. You can’t get an electric car into production for $65 million.

My own calls on behalf of good technology companies with real sales and earnings have doubtlessly damaged my credibility. But why speculate on a company like Mullen when you can get any NASDAQ stock for a 23% discount?

If you think you can make money here, either by squeezing Mullen’s shorts or shorting the stock yourself, good luck to you. You’re swimming in a pool with sharks and you’re not one.

On the date of publication, Dana Blankenhorn held no positions in companies mentioned in this story. The opinions expressed in this article are those of the writer, subject to the InvestorPlace.com Publishing Guidelines.

Dana Blankenhorn has been a financial and technology journalist since 1978. He is the author of Technology’s Big Bang: Yesterday, Today and Tomorrow with Moore’s Law, available at the Amazon Kindle store. Write him at [email protected], tweet him at @danablankenhorn, or subscribe to his Substack.